One of theTop 100 local government stories of 2017 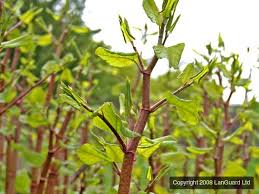 Residents in South Wales sued Network Rail after claiming knotweed growing on a railway embankment had spread to the foundations of their nearby homes.

They claimed the value of their properties has been badly affected by the destructive plant, which has roots that can force their way through existing weaknesses in brick and concrete.

The Government body was ordered to pay compensation along with the cost of treating the issue.

Property Care Association (PCA), which represents professionals in the invasive weed control industry, warned the ruling is likely to have major implications across the UK.

The national trade body believes it could encourage more homeowners to take similar action and is urging landowners to be aware of the potential for problems.

‘This landmark ruling is one that could change the landscape for those responsible for large tracts of land such as local authorities,’ said Steve Hodgson, chief executive of the PCA

‘Japanese knotweed is a destructive plant that can have a hugely damaging effect on the urban environment and any knotweed or other invasive species growing on their land could potentially spread to neighbouring properties.

‘Homeowners living adjacent to public land could now be emboldened to take action too, so this puts the onus squarely on landowners to control and remediate any issues, particularly near houses, as soon as they come to light.’