Online registration for the 2018 Nos Galan Road Races opens at 10am on Monday, September 10 - and it’s going to be a very special night on New Year’s Eve. 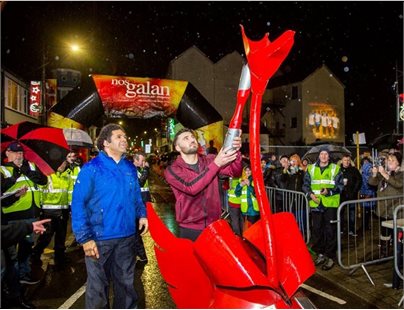 This year marks the 60th anniversary of the event, which began on December 31, 1958, going on to become a world-renowned, award-winning annual occasion.

Race registration fees for 2018 are frozen, and will remain the same as last year.

This year’s Nos Galan Road Races may seem a long way off, as everyone continues to enjoy the summer weather, but the ‘race for a place’ these days is as keenly contested as the races themselves.

All race categories fill up fast each year, months ahead of race night.

Councillor Ann Crimmings, chair of the Nos Galan Committee and Rhondda Cynon Taf Council Cabinet Member for Environment, Leisure and Heritage Services, said: “It comes around so fast every year - I cannot believe we are just weeks away from online registration opening for what will be the 60th anniversary of the Nos Galan Road Races.

“As you can imagine, preparations are already well underway for this year’s event, and I am delighted to say that the Nos Galan Road Races are as popular today as they have ever been.

“Last year, all race places were once again taken up long before New Year’s Eve, and we anticipate similar scenes in 2018 as more and more people are eager to be a part of the biggest street party in Rhondda Cynon Taf - especially on the Races’ 60th anniversary year.”

Event organisers Rhondda Cynon Taf Council, in conjunction with the Nos Galan Committee, are delighted to announce that Nos Galan Road Races 2018 online registration will open at 10am on Monday, September 10 via www.nosgalan.co.uk

The message is simple - register online early to take part in the 60th anniversary event in order to avoid any disappointment later on in the year.

Please note: There will be no race registration on the night.

The Nos Galan Road Races attracts thousands of athletes of all ages and abilities from around the world. The event consists of a series of childrens’ races, an elite race and a 5K fun run around Mountain Ash town centre.

To be a part of the 2018 Nos Galan Road Races, register online from 10am on Monday, September 10.

Please note: All race places are non-transferable. Anyone found to be taking part using another person’s unique race number identity will be disqualified.

The objects of Cynon Culture are to promote and protect all aspects of the culture and history of the Cynon Valley. Our website is intended to inform and generate people’s interest in the valley and surrounding areas, and the material that is on this website is the results of many years of research. The material that you will see provides, for the first time, a detailed history of the valley online. The website is dedicated to all the researchers who loved local history and left a legacy of material for me to access, and in turn be able to provide for you - the readers.