Should Cynon Valley have a direct bus route to Cardiff just like Rhondda and Merthyr?
Yes
88%
NO
13%
Total votes: 16

A Blue Plaque in memory of champion boxer David Dower MBE is being officially unveiled on his former home in Abercynon this coming weekend. 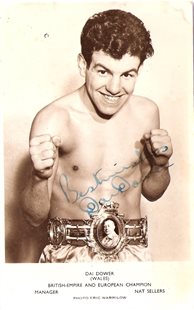 The unveiling of the historic Blue Plaque will also coincide with the launch of the new official biography David Dower: Fighter, Family Man, Legend, priced £10.

Having attended the local school in Abercynon, David overcame ill health as a child and went on to become a Welsh amateur schoolboy boxing champion, along with his lifelong friend and former Councillor and Mayor Alby Davies MBE.

He was also a member of the famous Great Britain boxing squad at the 1952 Olympic Games in Helsinki, alongside the then unknown Sir Henry Cooper.

David went on to become British, European and Empire flyweight champion, as well as a World title contender.

“The name David Dower is synonymous with Abercynon and the world of sport, especially boxing.

“He may have been small in stature but achieved so much during his lifetime and it is fitting that David’s family, friends, and the community pay tribute to him this coming weekend with the unveiling of the Blue Plaque and the official biography David Dower: Fighter, Family Man, Legend.”

The official unveiling of the Blue Plaque in memory and honour of David Dower MBE takes place outside 28 Herbert Street, Abercynon, at noon on Saturday, November 3. A temporary road closure will be in place in the area to facilitate this event.Boxing at the Pavilion, Mountain Ash

Flooded households can claim up to £1,000 emergency Welsh Government funding

So just how much will this Labour administration payup for the Welsh people?

The county borough was formed in 1996 following the abolition of the county of Mid Glamorgan. Rhondda Cynon Taf County Borough Council was formed by the merger of the former Mid Glamorgan districts of Rhondda, Cynon Valley and Taff Ely (with the exceptions of Creigiau and Pentyrch). The population of the county is 234,300 (Census 2011), consists of 99,700 households (Census 2011) and has 7 neighbouring local authorities